The present church was built in 1835 but believed to have been built on a previous one dated 1822. It was built by members of the congregation, many of whom were tradesmen. The stones for the building were gathered by the women from the fields. It has no damp course. This also became known as the Stone Chapel. 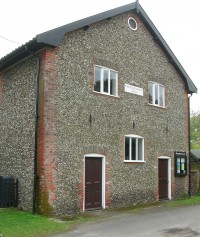 The building stands on the entire piece of land which was given by Mr James Cole a farmer. The land was known as Cole's Piece and also gave the name to Cole's Hill which leads down to Chapel Lane.

Sunday services and Christian witness has continued through the years to the present time when services are usually held at 10.30am, occasionally at 9.30am and in July and August evening Songs of Praise are held each month.

All the times and details of services are advertised in the Wenhaston Warbler, Team Times and on posters at the Village Hall and all are welcome.